ETRI was ranked NO.1

The Electronics and Telecommunications Research Institute (ETRI) ranked top for three straight years in the US evaluation of patents. This is a feat based on leadership in new technologies in the mobile communications sector and the consistent effort to file for relevant patents in the US and all over the world.

The Ministry of Science, ICT and Future Planning said Wednesday in the US patent data consultancy ipIQ's comprehensive patent evaluation 'Innovation Anchor Scorecard' for 2013, the ETRI retained the top place ahead of Massachusetts Institute of Technology (MIT), University of California and Stanford University.

The ETRI posted 883 patent counts, overwhelming MIT with 301 counts, University of California with 455 counts and Stanford University with 178. In terms of industry impact, the ETRI scored 0.94, half of that of MIT, but higher than 0.77 of Taiwan’s Industrial Technology Research Institute.

China's Tsinghua University, which was placed fifth last year, and Germany's Fraunhofer Society which was placed ninth, did not make it into the top 10 this year. There were other South Korean institutions on the list of the top 100 in addition to the ETRI, such as KAIST which ranked 50th, Seoul National University 67th, KIST 74th and POSTECH 83rd.

The ETRI has set up and operated a division dedicated to intellectual property rights since 1988. Through the division, the institute earned 161.1 billion won ($152.3 million) royalty from patents. In terms of the quantity of internationally standardized patents, the ETRI is placed third domestically behind Samsung Electronics and LG Electronics. 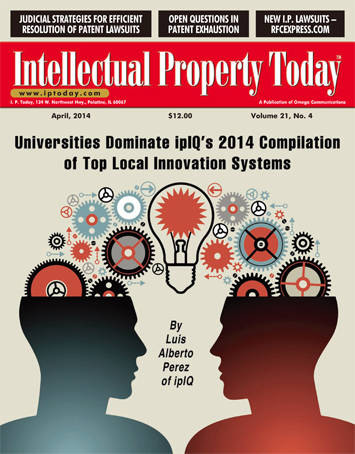 ETRI leads the initial scorecard with the highest patenting activity within the group combined with an average Industry Impact™ of 0.94. ETRI is working with relatively new technologies based on an Innovation Cycle Time™ of 7 years which is 14th overall. ETRI maintains 4 research locations in South Korea and a growing international network which sapns 22 Countries.

The top 10 institutions in the initial Scorecard are headquartered in South Korea, U S, Taiwan and Germany. The top 10 include 4 universities, 3 government agencies and 3 research institutions.